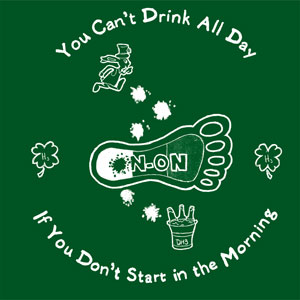 For all of my Facebook Friends, stop reading; this is a repost from last week.

thinking out loud: more and more people not letting me do their t-shirt designs. Rather, they get their 13 year old nephew to design it on their IPad. They know the design is no good, but they just don’t care. The ‘not caring’ part bothers me. This, along with other observances in the Arts leads me to wonder: because of the availability of so much information and the collapse of faith, are we now becoming artistically impotent? it seems in general we have lost a sense of wonder, an eye for eternity, and a desire to create something unique. In other words, if we are not special and our destiny is a dirt pile, why bother? Don’t get me started on Pride in Workmanship

Here are excerpts from a thoughtful reply authored by Mark Matos:

The good news and bad news (but let’s focus on the good news)……………..
First the bad news though. Wall Street, Consumerisms in general, and Commoditization have driven the “make it as cheap as possible” mentality. People usually buy the cheapest cr*p possible (because it’s cheap). Look at Garment Manufacturing towns in the 80s – while the workers in those towns pushed the “Buy USA” message, they themselves bought more foreign made cloths than the average American. Why? It was cheaper. The end result? In the 1960s 95% of clothing bought in the USA was made in the USA. Today, just 2% of clothing is made in the USA. – People want to pay less, even when it adversely affects them in the long run.
For what it’s worth I believe the Commoditization of everything is the probably the evilest the driving forces. People now see everything as “stuff” instead of seeing things as being special or unique.
Now an example of some of the good news………. For example, while medium and low price Fender Basses (guitars) have become Commodities, there are now lots of small and medium size manufacturers that offer high quality, handmade Basses where they truly care about the Artistry and Craftsmanship of every single instrument that they make. This is just one example that shows some people still care about craftsmanship and art and that in some cases the Commoditization of something can create opportunities for people who make quality items.
What I think bothers you (and a lot of us) is the Commoditization of things that we consider to be art. At that point, it is no longer art, it’s just stuff.
People wear T-Shirts with company logos on them – why? It’s not because they want to wear art, something cool or something unique. That shirt is a commodity, like toilet paper. They don’t care.
But, many people still care. Many people differentiate between art and commodities. Art (obviously) still exists, but the lines are very blurry for the majority.