Rimshot’s Got a New Computer! 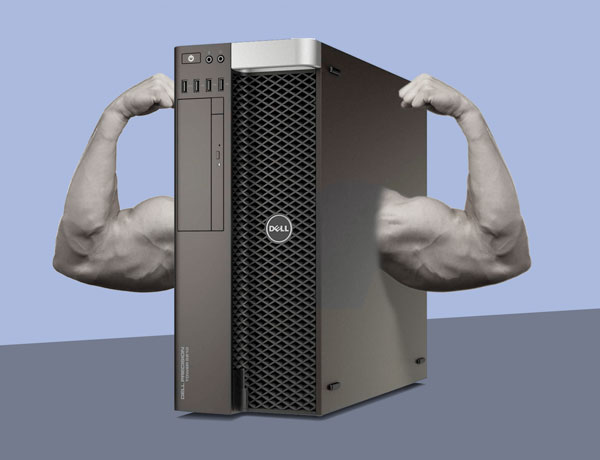 Warning: the following info will only be interesting to nerds.

Well, after about 7 years I have added a new, more beefier pooter to the arsenal.  Even though my old one is pretty beefy even by today’s standards I felt it was a good time to update for 2 reasons:

I stayed with the Precision series and built with the 5810 tower.  This time I went for a raid 5 configuration; going for performance and the ability to switch out a drive if it fails without having to start all over.  My last computer had a raid 0 config – good performance but I got burned when one of the hard drives failed several years back.  At least with Dell builds, going raid 5 had some limitations.  Namely, I had to go with smaller drives compared to what’s available.  I have 3.63 T drives this time – just about the same size I had on my old computer.  Still, with large drives, SSD’s are just way too expensive so I went with standard.

I substantially updated the video card with a NVideaQuadro M4000.  I also got pretty beefy with 64 gigs of RAM.  Again, due to raid 5 limitations and not having the readily available funds of Bill Gates, the processor is a twelve (yes,12) 3.6 ghz setup.  Oh Yeah!

I have noted faster bootups, a little better performance out of Photoshop, but nothing crazy.  I guess we shall see if this system was worth the cash whenever I fire up Adobe Premiere.  Fingers are crossed.  One of the coolest performance boosts is apparent when using Corel Painter.

If you are wondering what I did with my old one (let’s face it, you are probably not) it is still in play.  Right now it is the most expensive computer ever built only to run QuickBooks.

That’s it for now.  I promise to have more artsy-fartsy content in future posts.